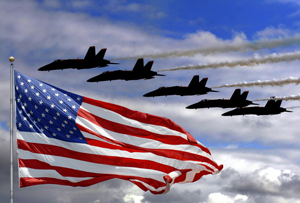 The heart of the North Country is home to Fort Drum and the 10th Mountain Division (Light Infantry). The largest employer in northern New York, Fort Drum is an integral part of the North Country and an essential installation for the region and for the United States Military.  The history of the base reaches back to 1907, when the Pine Plains Training Area was established at the site of today’s fort. The oldest son of President Ulysses S. Grant, Brigadier General Frederick Dent Grant, brought his command of ten thousand soldiers-- 2,000 Regular Army Soldiers and 8,000 militia men—to this area north of the Black River for training, which he soon found to be a successful undertaking in this particular spot. Pine Camp quickly became nationally recognized, hosting a training group of 36,500 soldiers from throughout the northeast in 1935. When World War II began, 75 thousand additional acres were purchased and the training area made room for Gen. George S. Patton's 4th Armored Division, the 45th Infantry Division, the 5th Armored Division, and the 754th Tank Battalion, as well as for use as a prisoner of war camp. In 1951, Pine Camp was expanded again and named Camp Drum, after World War II First Army Commander Lt. Gen. Hugh A. Drum. It served as a training camp during and after the Korean Conflict as well as the annual training ground for the Northeastern National Guard and Reserve Forces. Camp Drum was redesignated Fort Drum in 1974 and became home to a permanent garrison for the first time. Ten years later, in 1984, Fort Drum became home to the 10th Mountain Division (Light Infantry).

The 10th Mountain Division had its earliest roots in the 1940s as the 87th Mountain Infantry Battalion, a division trained for winter and mountain warfare; when it was activated in 1941, the Battalion was the first mountain unit in the United States Army. In 1945, the force joined the World War II fighting in Italy’s North Apennine Mountains and successfully attacked German mountain strongholds along the Monte Belvedere-Monte della Torraccia ridge, an area on which previous attacks had proven unsuccessful. After contributing to the end of organized resistance in Italy and destroying five elite German divisions, the division returned home. Between 1948 and 1958 the group became known as the 10th Infantry Division and focused their efforts as a training division. Interestingly, this group is partially responsible for skiing as a recreational pursuit: during peace time, they began building up skiing as a recreational sport. Aspen and Vail, Colorado, Sugarbush, Vermont, Washington’s Crystal Mountain, and New York’s Whiteface Mountain ski resorts and areas were all built by veterans of the division, for whom skiing had been an essential part of their training.

The 10th Mountain Division (Light Infantry) was officially reactivated in 1985 and has since taken part in a variety of initiatives across the globe, and earned the designation of being the most deployed army division during the 1990s. The list of humanitarian, operational, and training deployments includes service in Desert Shield/Storm between 1991 and 1992, Hurricane Andrew relief in Florida in 2002, Operation Restore Hope and Operation Maintain Hope in Somalia between 1992 and 1994, Operation Uphold Democracy in Haiti in 1994 and 1995, and Task Force Eagle in Kosovo in 1995 and1996. Since the early 2000s, the 10th Mountain Division has been a part of Operation Enduring Freedom, which began in 2001, and Operation Iraqi Freedom, which began in 2003.

Today, after nearly three decades, the 107,265 acre base is home to 19,605 Active Duty Military members and 19,810 of their family members, plus a civilian workforce of 4,739, enough population to make it a thriving community in its own right. It supports the training of nearly 80,000 troops per year. Fort Drum and the surrounding areas are known as “Drum Country”, a place that fosters a spirit of community between the soldiers and civilians that call the area home. Fort Drum is just a few miles away from the attractions, amenities, and entertainment of Watertown and the on-water summer playland of the Thousand Islands Region and Lake Ontario, only 30 miles away from Canada, and just west of the Adirondack Park, where hiking, camping and other woods-related pursuits abound. Right on the premises at Fort Drum is the 10th Mountain Division & Fort Drum Museum, a tribute to the history of the fort and the division throughout decades past and a place that inspires awe and hope in military members, their families and civilians alike. The museum is open to the public on weekdays.

For more information on Fort Drum visit www.drum.army.mil. or drumcountry.com.